So, as you all know, I’ve been on a speech kick for the past few months. So much so, I decided to create this ongoing series, “Timeless Teachings,” where I highlight quotes from favorite speeches that I have on repeat. This week I wanted to focus on someone who literally never gets any recognition for the achievements he made in bringing black liberation to black folks in this country by highlighting quotes from a speech I’ve been listening to on repeat.

If you’ve been following my writings, you know I had my “self-awakening” in the summer of 2012. It’s the summer I fell in love with who I was as a person. Most importantly, I fell in love with my own blackness. It was the first time I heard our own history through the lips of our fallen leaders instead of through the lips of history teachers who were only interested in half the truth. 2012, was the first time I heard about Marcus Garvey.

Quick back story about Marcus Garvey for those unfamiliar with his work. According to History.com, Marcus Garvey was a Jamaican-born black nationalist and leader of the Pan-Africanism movement, which sought to unify and connect people of African descent worldwide. In the United States, he was a noted civil rights activist who founded the Negro World newspaper, a shipping company called Black Star Line and the Universal Negro Improvement Association, a fraternal organization of black nationalists. As a group, they advocated for “separate but equal” status for persons of African ancestry, and as such, they sought to establish independent black states around the world, notably in Liberia on the west coast of Africa. 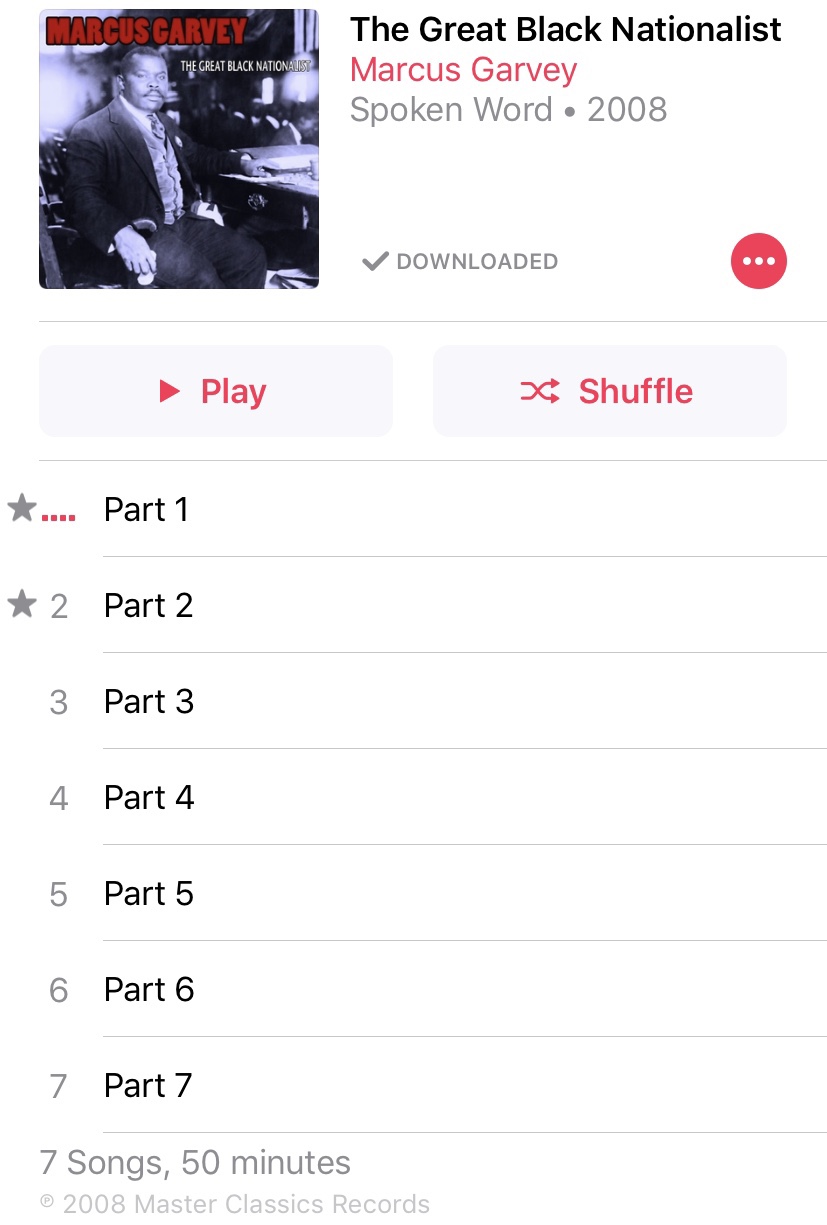 So browsing through Apple music I ran across this spoken word album titled, “The Great Black Nationalist,” by Marcus Garvey published in 2008. Now, I’m pretty familiar with Malcolm X’s philosophy regarding Black Nationalism and honestly, I thought Malcolm coined the term “Black Nationalist.” So you could imagine how surprised I was to find out Marcus Garvey was preaching black nationalism 30+ years before Malcolm X even stepped on the scene with his philosophy on black nationalism. Of course, the title grabbed my attention so I gave the first track a spin. As you can see the album is made up of 7 tracks. Each track (with the exception of the first two) are small sound clips from various speeches Marcus Garvey gave throughout his lifetime. After listening to tracks 1 & 2, I was in complete awe. So much so I had to track down the original speech, but there was only one problem… THE TRACKS LITERALLY HAVE NO DETAILS. So I got on my Sherlock Homes shit and crawled the internet in hopes of finding the speech in its entirety instead of 10 minutes clip teasers. After three nights of searching, I finally found what I was looking for! Way back in 1924, Marcus Garvey was in Harlem talking to a crowd of followers when he delivered a speech that is just as powerful today as it was 95 years ago.

“I unequivocally rejected the racist assumption of much white American Christianity. Namely that God had created the black man inferior. And that he intended Negroes to be a Servant class, heavers of wood and drawers of water. Well, I predicated my view of men in the doctrine of E Margo de E “all men regardless of color are created in the image of GOD.” From this premise come the equality of all men and brotherhood of all men. The Biblical injunction of Acts 17:26 reminds us that He created of one blood all nations of men to dwell on the face of the earth and is most interested in brotherhood than with one’s own race. Because if Negroes are created in God’s image, and Negroes are Black then God must IN SOME SENSE be Black.“

“Liberate the minds of men and ultimately you will liberate the bodies of men.”

“I shall teach the black man to see beauty in his own kind and stop bleaching his skin and otherwise looking like what he’s not. Back in the days of slavery, Race mixture, Race miscegenation all occurred BECAUSE THE AFRICAN WOMAN HAD NO PROTECTION FROM THE SLAVEMASTER. Therefore there is no need today for black people themselves to freely continue a PRACTICE that SMACKS so much of slavery.”

“Our leaders say the race problem will be solved thru higher education. Thru better education, black and white will come together, that day will never happen until Africa is redeemed.”

“If black people knew their glorious past then they would be MORE inclined to respect themselves.”

“The time has come for the Black man to forget his hero worship of other races, and to create and emulate Heroes of his own. We must canonize our own Saints, create our own Martyrs, and elevate to positions of fame and honor black men and women who have made their distinct contributions to our racial history.”

“Africa has created millions, countless millions of black men and women in war and in peace, whose luster and bravery outshine that of any other people. Then why not see good and perfection in ourselves? We must inspire literature and promulgate a doctrine of our own without any apologies to the powers that be. That right is ours and God’s.”

“Their history is as rude in its primitiveness as ours; their ancestors were running wild and living in trees of branches like monkeys as ours; they made human sacrifices, ate the flesh of their own dead and wild meat from beasts for centuries even as they have accused us of doing; their cannibalism is more prolonged than ours. When we were embracing the banks of the Nile, they were still drinking blood out of the skulls of their conquered dead. After our civilization had reached the noonday of progress they were still living in holes with bats, rats, and other insects and animals. After we had already unfathomed the mystery of the stars and reduced the heavenly constellations to minute and regular calculus they were still backwoodsmen, living in ignorance and in blatant darkness.”

“The world is indebted to us for the benefits of civilization. They stole our arts and sciences from Africa. Then why should we be ashamed of ourselves? Their modern improvements are but duplicates of a grander civilization that we reflected thousands of years ago, without the advantage of what is buried and still hidden, to be reflected and resurrected by our generation and our posterity.”