“I must confess that over the last few years I have been gravely disappointed with the white moderate. I have almost reached the regrettable conclusion that the Negro’s great stumbling block in the stride toward freedom is not the White Citizens Councillor or the Ku Klux Klanner but the white moderate who is more devoted to order than to justice.”

Like most progressives, I didn’t have much fun last night…

For those of us who truly want a bright future for this country, last night was a pretty tough pill to swallow.

Before I get into this shit, let me holla at my revolutionaries real swift…

So look, last night we took some surprising losses, and when I say surprising… Massaccutes… Fucking Massaccuttes bruh… Anyway, I know a lot of us woke up this morning feeling a bit defeated.

But listen… Don’t look at last night as a total loss. Bernie SMASHED shit in California while damn near taking Texas too. Both of those are good signs for the future, and I’m confident we’ll be seeing more big states throw their weight behind Bernie.

Instead of seeing last night as a loss, start looking at it as a wake-up call. The establishment is freaking the fuck out right now and pulled some grimmy, Empire Strikes Back type shit all in an effort to stop our movement.

But let me be clear… They did all that shit, and we’re still in this bitch…

Last night we learned that the Establishment isn’t going to just lay down and let us lead this nation into the future we deserve. Instead, they showed us their bag, and that mf runs DEEP with dirty tricks for any and everybody.

It’s time to take the mf gloves off bruh. We can no longer let shit slide cause you don’t want to be known as a “Bernie Bro.” Fuck that shit bruh, they’re going to call you that regardless so own that shit and keep hitting them with the facts.

After the results from Super Tuesday started to roll in I hit Facebook and vented. I was venting, venting too bruh. If I saw a status roughly mentioning Super Tuesday, I was on it. Fact-checking mfs left and right, smh. During my venting session, I said something that at the moment felt like the truth. But now looking back on it, I was wrong.

It all started when I got triggered by some moderate.

So, of course, I had to jump into the convo and correct the record. Well, at least I thought I was correcting the record… 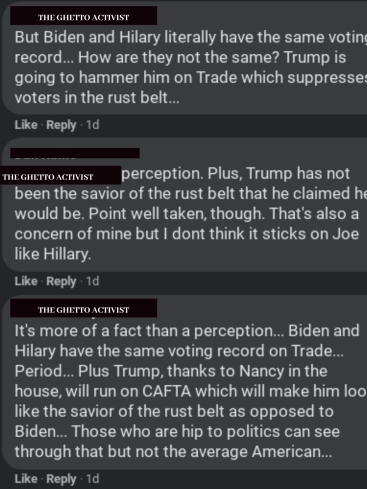 After reading this you’re probably thinking to yourself, ‘where were you wrong bruh?’

I was wrong from the jump… Biden and Hilary don’t have the same voting record. Don’t get me wrong, both of their voting records are trash, but Biden’s is far, far worst, and it’s time we start throwing that shit in his face. Because please believe me, Trump will leave no stones unturned.

Just so you know, I don’t fuck with Hilary in the slightest. After all, she fucking lost to Trump which gave us this shit show in the first place. But since I’m a progressive I can’t help but be fair and say even her voting record doesn’t compare to old Joe’s.

For those of you who have student loan debt, have you ever wondered why there’s nothing you can do to shake off the shackles of 21st-century indentured servitude? Have you ever wondered why you can file bankruptcy for all kinds of debt other than your student loan debt? Well, lucky for you Joe Biden knows why you’ll be stuck with that crushing debt for the rest of your life.

Hilary had her downfalls including the infamous “super predator” speech, but as damaging as those words were, they were said in a campaign speech. She wasn’t on the floor of congress talking that shit while welding real political power like old Joe was…

Now take all this shit and mixed it with his horrible record on trade, social security, and the war in Iraq, and you’ll have the perfect recipe for a Trump’s re-election.

Its as if we forgot what the fuck happened in 2016 already. HELLO PEOPLE, we ran a moderate against Trump and she fucking lost. There were a ton of factors that went into that race I know, and no one can say for sure what really caused Hilary the White House.

However, I can say one thing for sure. It should’ve never been close in the first fucking place. Trump ran to the left of Hilary on trade and it cost her the rust belt. Trump ran as an anti-establishment outsider who called out Hilary’s self-dealing and hints of corruption with the bs email scandal. Now, of course, us progressive knew Trump was just as corrupt but it did enough damage to discourage enough mfs to not show up to the polls.

We all remember the “lock her up” chants right? Well, get ready for that shit to make a comeback. Except for this time, they’ll throw a little remix in there and shout “lock HIM up!”

Hunter Biden might be legally innocent but what does that matter in the realm of politics? Trust me, Trump could give a fuck about what’s right and what’s wrong. We’ll have to sit through months and months of politically motivated investigations centered around Hunter Biden and Burisma that will surely remind us of 2016. Don’t just take my word for it though…

Related source: GOP senator will release an interim report on Hunter Biden and Burisma within next two months

I mean Joe’s voting record alone is enough to suppress enough Democratic voters to land Trump the electoral college, but Biden has something else working against him. Just like Trump, he’s a mf liar.

From saying he got arrested in South Africa for standing up against apartheid, to completely lifting another politician’s speech word for word, I’d say it’s pretty clear this mf has a serious lying problem…

The Real War Is Here

It’s pretty fucking clear which side the establishment is on. I only ask, where will you stand?

P.S. Warren, wtf bruh? You see what these bum ass moderates are doing right? It’s time to click up bruh. I heard you’ve been in talks with both the Sanders and Biden campaign in regards to endorsements… I can’t believe I’m saying this, but if you even think about endorsing Biden during this fight for the soul of the party, you can kiss that progressive title and support away for good.