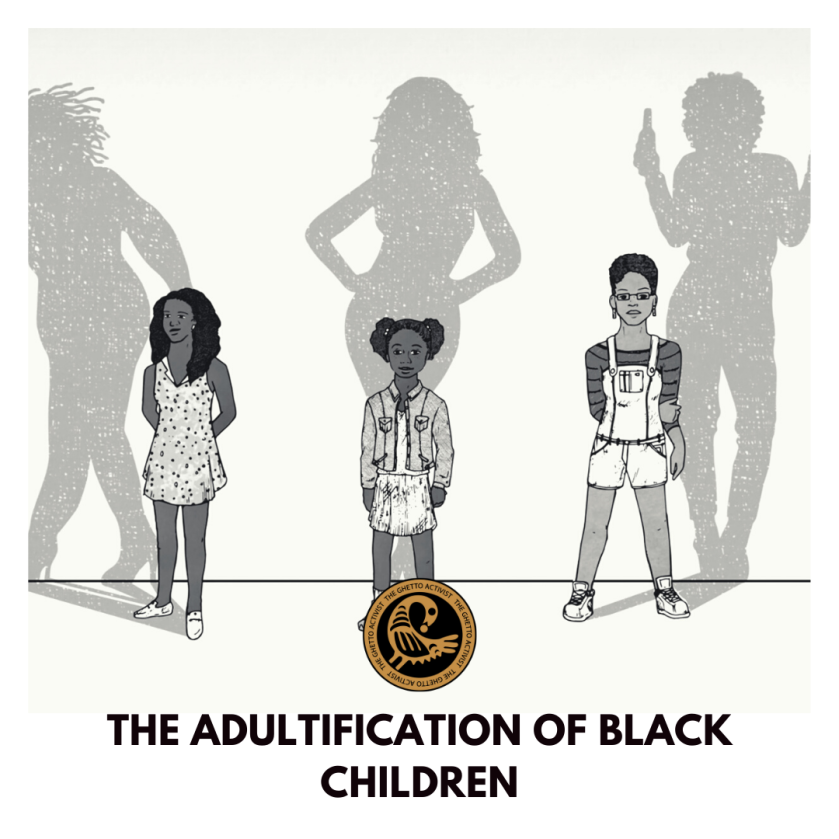 In 2012, Lionsgate Films launched The Hunger Games franchise, based on the novel series of the same name. When news broke out that the role of Rue would be played by Black actress Amandla Stenberg, public criticism ensued. A string of racist tweets was released, criticized the casting choice, and even went as far to say that the casting of Stenberg “ruins the movie” for them. That somehow the child is now “less innocent” than the blonde-haired blue-eyed little girl they had already imagined. This is all despite the fact that her character was written to have dark skin, according to the author.

Stenberg fell victim to blatantly racist backlash. She was 13-year-old at the time.

But let’s not just look at this at a celebrity level. Countless times have black children fallen victim to discrimination, scrutiny, and excessive punishment in comparison to their white peers.

The School to Prison Pipeline

The phenomenon known as the School-to-Prison pipeline describes the grossly disproportionate tendency of minors from disadvantaged backgrounds to become incarcerated due to increasingly harsh school and municipal policies.

But let’s discuss this phrase: ‘in-school arrests’ for a moment.

There are several instances within the last couple of years in which law enforcement are called on children of color in schools for very minor (and not illegal) offenses. In October 2019, a video showed a police officer using excessive force on an 11-year-old Black girl. The student was accused of violating school rules such as picking at a sign that was taped to a door and taking too many milk portions from the cafeteria. She was also falsely accused of assaulting the school’s principal. Somehow these offenses gave the former police officer the authority to shove her against the building, push her to the ground, and yell in her face as she continues to cry and beg to be let go, even after a school official clearly tells him to quit being excessive with the young girl.

In another case, a Seattle-based elementary school teacher called the police on her student. She filed a police report saying that she was being threatened by that student. The student in question was a Black male fifth-grader, a couple inches shy of being five feet tall. News of this caused valid outrage, as well as opening a conversation for the school of when it should be appropriate to involve police in the discipline of a child. For whatever reason, instead of reporting that child to the principal or calling the parents, the teacher skipped right into filing a police report on a minor.

Research from the American Psychological Association shows that Black boys as young as 10 are more likely to be mistaken as older, be perceived as guilty, and –if accused of a crime– face police violence. In other words, in an age in which White children are usually given the benefit of the doubt and have the view of innocence to forgive their actions, Black boys are not given that same benefit. The study included 176 police officers (mostly White males) and 264 (mostly White) female undergraduate students.

This type of dehumanization is what leads to tragedies such as Tamir Rice, a 12-year old boy shot by police just seconds after they arrived in response to a 911 call.

A report from the Georgetown University of Law center reflects the same notion when it comes to the innocence of Black girls. Compared to white girls of the same age, Black girls between the age of 5 and 14 are seen as needing less nurturing and support, and more knowledgeable about adult topics (including sex).

Looking at this research, I couldn’t help but think of the other Black girls I grew up with. The ones who’s bodies developed earlier, who inadvertently attracted the attention of grown men, and who were also simultaneously put into the position of caretaker for their younger siblings. Men who had no business eyeing them would give them unwanted attention, and yet my friends were the ones accused of being “fast” and “too grown.”

It makes me think of an infamous video from 2015 in which a White police officer –a whole grown man– pinned down a 14-year-old Black girl at a pool party. The police officer barrel rolled into the scene, yelling at and disorienting all of the teenagers in the area. He proceeded to man-handle the 14-year-old girl and, when approached by other concerned teenagers on the scene, quickly whipped out his gun and started pointing it straight at them. He goes back to the teenage girl, pins her face down in the ground and kneels on her, putting all of his weight on her back.

I don’t know what the police were called for, but it’s pretty obvious that none of the teenagers were being belligerent and were all utterly confused and shocked by his actions. For a full grown man to pin his weight down on to a teenage girl that couldn’t have been any more than 100 lbs soaking wet is simply despicable. And it is also another prime example of how a Black minor is viewed to be less innocent in the eyes of a White police officer than her White peers.

Media Influence in the Bias

We can’t ignore the media portrayal of Black victims that ultimately play a role in swaying public perception of said victims. This is an effort to make the Black victim appear less sympathetic and to seemingly validate reasoning as to why that person was abused, killed, etc.

One glaring example would be the difference between media coverage of Trayvon Martin, a Black 17-year-old boy murdered while walking back to his father’s house from a convenience store, and Brock Turner. Who of course was the 19-year-old white man caught in the act of raping an unconscious woman. When news broke of the incident that resulted in the death of Martin, the articles would usually bounce between a close up of him donning a grey hoodie or a picture of him smiling while facing the camera in a red shirt. However, in attempts to defame his character, other articles would counter by showing pictures of Martin in a white tank top, flashing the middle finger at the camera–or another close-up of him showing off his fitted grills. This is a common ‘scare and validation’ tactic as if to say: Look at this guy! He’s not a good kid, look at what he’s doing! He looks like a thug! He deserved what he got.

Meanwhile, Brock Turner was literally caught by two graduate students as he was raping an unconscious young woman behind a building. Articles reference a professional photo of Turner, from a Stanford yearbook. He dons a blue blazer, a neat tie, and a bright smile. Articles reference him as a ‘good student’ and ‘great athlete’ as if that mattered to the subject at hand. His father defended him, saying that his son didn’t deserve to go to prison over “20 minutes of action.”

At his trial, Turner was found guilty of three felonies. Despite this, he was sentenced to six months in prison, and ultimately released after three months.

In short, a 17-year-old Black kid ‘had it coming to him’ and yet a 19-year-old White guy caught in the act of his crime should be ‘given grace.’

Even in recent events in Kenosha, WI, we see this idea of false white innocence in Kyle Rittenhouse. A 17-year-old white male with an already existing criminal record, who crossed state lines to counter protest in a completely different state. The end result? Two dead and one injured by his gun fire. The police response to Kyle was non existent; no type of retaliation was given to him despite the fact that he approached police fully armed. Police were able to arrest him–peacefully—the next day. This is the exact opposite response police gave Jacob Blake just days earlier when he was met with seven shots in his back.

I really wish that this narrative would become outdated, but it seems like there is always a blatant display of favoritism towards white children and not at all any grace displayed to Black children.

My husband and I are both Black, we will have Black children later down the road. The idea of raising a Black child in America does worry me. My husband is a 6’5 Black man; and the likelihood that my future son will be just as big is very high. Somehow being Black, tall, and strong is more than enough reason for police to antagonize him.

How long will it take for white adults to start seeing my future kids as “cute” and stop seeing them as “threats?” As disruptive, or imposing, or intimidating? Will I still have to continue the conversation about how they have to conduct themselves to reduce the chances of a police officer escalating a minor infraction with them? Will I still need to explain to them that their white friends will be allowed grace that they may never experience? If I can be honest, I don’t know what type of America my kids will live in by the time they become cognizant of themselves.

Pay attention to these articles as they are released, whether they veer to one side of the political spectrum or the other. Who is called a kid? Who is called a minor? And who is referred to as a man? This language seems insignificant but is actually very powerful in molding our perceptions of what is going on around us.

When a shooting massacre takes place, what do they say about that shooter if it turns out to be a white man? Do they detail his criminal history, or do they talk about how shocked their family/friends are that ‘someone like him’ would do such a thing? Do they talk about his hobbies and interests, how he loved to go fishing every weekend or his sports accolades?

There is no reason why a Black family, including a 6-year-old girl, should be held at gunpoint by the police with false accusations of stealing. The reaction to the family was needlessly hostile, as was the police response to Elijah McClain just a year prior that ended with him losing his life at the hands of overzealous police officers despite never actually being accused of a crime. But somehow police could easily bring into custody James Holmes alive after he had just opened fire into a crowd of movie goers, taking 12 lives in the process in what is now known as the 2012 Aurora Shooting.

It’s one thing to grow in understanding of the systems that keep racism in place in our society, it’s another thing to reflect on oneself and ask how you may have fed into the idea that Black kids are less innocent, more resilient, more intimidating, etc. What type of expectations are you putting on a Black child that you may not be putting on a white child or teenager? Especially if you are someone who often works with children (i.e. teachers, counselors, pediatricians, etc.) take a moment to look inward and really reflect on some of your inner biases. Please don’t less false ideas of ‘Black resilience’ or ‘Strong Black woman’ tropes keep you from giving the attention, love, and grace that Black kids so rightfully deserve.

Hi there! I’m Raven, TGA’s first contributor and the first member of The Ghetto Community! Based out of the Northern VA / Metro D.C. area, I work full time as a Case Assistant. However, my true passions lie in writing and serving others! I created my own blog Serendipity & Such, which centers around topics of personal growth and development. I also have writing featured in Medium publications that explore topics such as race, communication, relationships, and culture.