“The world is indebted to us for the benefits of civilization. They stole our arts and sciences from Africa. Then why should we be ashamed of ourselves? Their modern improvements are but duplicates of a grander civilization that we reflected thousands of years ago, without the advantage of what is buried and still hidden, to be reflected and resurrected by our generation and our posterity.” – Marcus Garvey

I shared this image of Ancient Africa in the intro piece in hopes that it’ll set the stage for this piece. Most African Americans descend from the half million Africans who landed on the shores of North America as captives during the trans-Atlantic slave trade. The vast majority came from Western Africa (shaded area above) whose history is a story of the rise and fall of many kingdoms and empires that date back to at least 2000 BC. Consider this a quick crash course into 2000 years of astronomical historical achievements made by BLACK PEOPLE. Since the majority of us more than likely descended from the warriors of West Africa, I’m going to be diving deep into our ancient history rooted in West Africa. Don’t worry though, maybe someday in the future I’ll revisit the other empires & civilizations mapped out in the intro piece, especially Nubia & Kemet. But until then, buckle the fuck up and get ready for another history lesson.

The Rise of West Africa’s Most Powerful Empires

The sandstone escarpment of the Dhar Tichitt in South-Central Mauritania was inhabited by Neolithic agropastoral communities for approximately one and half millennium during the Late Holocene, from ca. 4000 to 2300 BP. The absence of prior evidence of human settlement points to the influx of mobile herders moving away from the “drying” Sahara towards more humid lower latitudes. These herders took advantage of the peculiarities of the local geology and environment and succeeded in domesticating bulrush millet – Pennisetum sp. The emerging agropastoral subsistence complex had conflicting and/or complementary requirements depending on circumstances.

In the long run, the social adjustment to the new subsistence complex, shifting site location strategies, nested settlement patterns and the rise of more encompassing polities appear to have been used to cope with climatic hazards in this relatively circumscribed area. An intense arid spell in the middle of the first millennium BC triggered the collapse of the whole Neolithic agropastoral system and the abandonment of the areas. These regions, resettled by sparse oasis-dwellers populations and iron-using communities starting from the first half of the first millennium AD, became part of the famous Ghana “empire”, the earliest state in West African history.

In West Africa, hundreds of abandoned stone settlements dating back to 2000 BC have been found near Tichitt and Walata (2000 BC-500 BC) in an area that later became part of the Ancient Ghana Empire (300 AD – 1200 AD) which is now in present-day southern Mauritania and western Mali.

Ghana became powerful by controlling the gold trade, which was being mined out of the Wangara region. Gahan was able to achieve this by declaring all productions of any goods the property of the king. Since Ghana controlled the gold trade, the people of Ghana were fairly wealthy. Especially the king and those closest. Ghana taxed ALL imports and exports. Yes, that includes all the gold that came into the empire and all that went out. To avoid inflation, a fixed periodical quantity was released.

The Mali Empire arose with the consolidation of several small Malinké Kingdoms in Ghana around the areas of the upper Niger River. Most of what is known about the Empire of Mali’s early history was collected by Arabic scholars in the 1300s and 1400s. A King named Sumanguru Kanté ruled the Susu Kingdom, which had conquered the Malinké people in the early 13th century. The King known as Sundiata (also spelled Sunjata) organized the Malinké resistance against the Susu Kingdom, and Sundiata is believed by many historians, such as Conrad David and Innes Gordon, to have founded Mali when he defeated Sumanguru Kanté in 1235.

The Mali Empire consisted of outlying areas and small kingdoms. All these Kingdoms pledged allegiance to Mali by offering annual tributes in the form of rice, millet, lances, and arrows. Just as Ghana, Mali prospered from taxes collected from its citizens, and all goods brought in and out of the Empire were heavily taxed while all gold nuggets belonged to the King. However, gold dust could be traded and at certain times gold dust was used as currency together with salt and cotton cloth. Cowrie shells from the Indian Ocean were later used as currency in the internal trade of Western Sahara

The most known king of Mali is the one and only Mansa Musa. It is debated by historians whether Mansa Musa was the grandson of one of Sundiata’s brothers, thus making him Sundiata’s grand-nephew, or if he was the grandson of Abu Bakr. What is known is that Mansa Musa converted to Islam and underwent a pilgrimage to Mecca in 1324, accompanied by 60,000 individuals and large quantities of gold. His generosity was supposedly so great that by the time he left Mecca he had used every piece of gold he had taken with him, and had to borrow money for the return trip.

Mansa Musa was known to be a wise and efficient ruler, and one of his greatest accomplishments was his commission of some of the greatest buildings of Timbuktu. In 1327 the Great Mosque in Timbuktu (seen above) was constructed and Timbuktu would later become a central location for learning. At the end of Mansa Musa’s reign, he had built and funded the Sankara Madrassa, which subsequently becomes one of the greatest centers of learning in the Islamic world, and the greatest library in Africa at the time. The Sankara Madrassa is estimated to have housed between 250,000 and 700,000 manuscripts, making it the largest library in Africa since the Great Library of Alexandria. 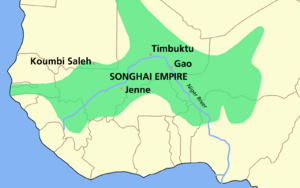 The Songhai people founded Gao around 800 A.D. and established it as their capital in the 11th century during the reign of Dia Kossoi.  As the city and region grew in importance, the Malian Empire decided it’s best to incorporate Songhai as a stronghold as it expanded across the West African savanna.

The Rise of Songhai

Mali’s power, however, was eventually weakened by palace intrigue that interrupted the orderly succession of emperors. Recognizing the weakness at the center of Mali, Gao rebelled in 1375. Songhai then began its own imperial expansion at the expense of Mali, conquering Mema in 1465 and three years later seizing Timbuktu, the largest city in the region, from the Taureg who had recently taken it from Mali.

Sunni Ali Ber, the military commander responsible for these victories, is widely considered the first great ruler of the Songhai Empire.  He continued to enlarge the empire, taking control of important Trans-Saharan trade routes as well as other cities and provinces of Mali. After Sunni Ali Ber’s death in 1492, his son, Sonni Baru, became emperor but soon lost the throne to Askia (Emperor) Muhammad Toure one year later.

The new ruler, Askia also know as Askia the Great, centralized the bureaucracy of his empire by, appointing virtually all of the mayors and provincial governors, established Sharia law throughout the empire, expanded Sankore University in Timbuktu and built numerous schools through Songhai.  Askia Muhammad Toure also strengthened political and cultural ties with the rest of the Muslim world, encouraging the immigration of scholars and skilled workers from Arabia, Kemet (Eygpt), Morocco, and Muslim Spain.  He was the first West African ruler to allow the exchange of ambassadors with these and other Muslim states.

After Askia Muhammad Toure’s death in 1528, Songhai enjoyed a period of peace and prosperity under a succession of emperors.  Urban-centered trade flourished in Gao, Timbuktu, and Djenne although the vast majority of Songhai’s inhabitants were small farmers whose fortunes were tied to success in agriculture rather than in commerce.

That period of peace and stability ended in 1591 when a civil war created an opportunity for Morocco Sultan Ahmad I al-Mansur Saadi to send an army to conquer Songhai. Al-Mansur hoped to control the West African gold fields and establish himself as the Caliph of Sudan.

The Western African civilizations of Tichitt and Walata, Nok, Sao, Gajiganna – Zilum, and the Ghana Empire were all located in the section of Africa where most African Americans would eventually come from. Needless to say, our history is far greater than slavery, and systematic oppression. I know this section of this miniseries was lengthy AF, but I had to pack it with as much information as I could to further my point that we only know 10% of our own history.

Of course, a lot of this history is new to me as well, so I encourage everyone reading this to follow each hyperlink provided for the source of all this information I was able to compile!

The next piece from this miniseries will cover the Trans-Atlantic Slave Trade Era that ripped not only our ancestors’ bodies from Africa but our conscious ties to our great history that shaped the civilized world we currently live in.